For centuries, we’ve toyed with our creature companions, breeding dogs that herd and hunt, housecats that look just like tigers, and teacup pigs that fit snugly in our handbags. But what happens when we take animal alteration a step further, engineering a cat that glows green under ultraviolet light or cloning the beloved family Labrador? Science has given us a whole new toolbox for tinkering with life. How are we using it?

In Frankenstein’s Cat, journalist Emily Anthes takes us from petri dish to pet store as she explores how biotechnology is shaping the future of our furry and feathered friends. As she ventures from bucolic barnyards to a “frozen zoo” where scientists are storing DNA from the planet’s most exotic creatures, she discovers how we can use cloning to protect endangered species, craft prosthetics to save injured animals, and employ genetic engineering to stock farms with disease-resistant livestock. Along the way, we meet some of the animals that are ushering in this astonishing age of enhancement, including sensor-wearing seals, cyborg beetles, a bionic bulldog, and the world’s first cloned cat.

Through her encounters with scientists, conservationists, ethicists, and entrepreneurs, Anthes reveals that while some of our interventions may be trivial (behold, the GloFish) others could improve the lives of many species—including our own. So what does biotechnology really mean for the world’s wild things? And what do our brave new beasts tell us about ourselves?

With keen insight and her trademark spunk, Anthes highlights both the peril and promise of our scientific superpowers, taking us on an adventure into a world where our grandest science fiction fantasies are fast becoming reality.

“Frankenstein’s Cat is smart, lucid, and full of surprises. There is hardly a page that doesn’t contain something new or unexpected.”
—Anne Fadiman, National Book Critics Circle Award-winning author of The Spirit Catches You and You Fall Down

"Genetically engineered glow-in-the-dark fish for your fish tank. Cyborg beetles concocted by the Defense Department. Five hundred different strains of transgenic mice caged in a Chinese laboratory. Science journalist Emily Anthes has a knack for ferreting out such eyebrow-raising specimens, and she makes the details of her complex subject matter highly readable in “Frankenstein’s Cat,” her first book as a solo author."
—The Washington Post

"An elegant tour of the wild and fraught sideshow of animal biotechnology ... In a bell-clear voice, the author examines the science behind genes, as well as cloning, cyborg insect armies, rescue rat-bots, “mass production of mutant mice” in China, bomb-sniffing beetle drones, prosthetic tails for dolphins, the possibility of enhancing animal sensory skills, and “ ‘pharming,’ in which simple genetic tweaks turn animals into living pharmaceutical factories.” Anthes lays out the facts, but it is still up to readers to decide which side of the ethical divide they will fall on. Learned, entertaining and illuminating."
—Kirkus Reviews

“With wit, high intelligence, and a lively writing style, Anthes portrays the new world of biotechnology—in which we control the bodies and brains of other animals—and the moral and philosophical issues so raised.”
—Alan Lightman, bestselling author of Einstein's Dreams

“Smart, funny and deep: Frankenstein’s Cat is a report from the frontiers of the scientific campaign to re-engineer animals to fulfill human desires ... Anthes, whose love of animals shines through on every page, takes her readers on a rich and challenging quest of self-discovery: what rights do the animal objects of our creativity possess—and what obligations to them and to ourselves must we accept as we reshape (again!) the living world? A great read.”
—Thomas Levenson, Professor of Science Writing, Massachusetts Institute of Technology, and author of Newton and the Counterfeiter

"This isn't a litany of lab horrors. It's a profoundly hopeful and often funny book about how the dividing line between human, animal and machine isn't as clear as you might think. In the future, animals might be colleagues as well as companions. And we may bring more species back from the brink of extinction than ever before. This is a must for animal lovers, as well as anyone curious about the future of biology.”
—io9

"Charming… the science is accessible and so, mercifully, is the ethics… a breezy introduction to a complex and controversial issue." Four stars.
—BBC Focus

"Anthes’s new book, Frankenstein’s Cat, is an important one precisely because of that visceral reaction we all feel in response to the very idea of biotech. It’s a no-bullshit account that looks at the way biotechnology is used today, separating fact from fiction and explaining what you need to know about this thing that creeps us all out.”
—The Stranger

“Tusked mice, transgenic goats lactating antithrombin, dogs with prosthetic testicles: science writer Emily Anthes reports from the wilder shores of animal biotechnology. A team at Fudan University in Shangai, China, for instance, has created 500 strains of modified lab mouse — and hopes to engineer 100,000. A Florida medical team has made a prosthetic tail for an injured dolphin. There is plenty more, but Anthes devotes the final word to bioethics, arguing that the advances are a chance to commit anew to animal well-being.”
—Nature

“Emily Anthes gets the balance just right… Always enjoyable, a page-turner of a popular science book with a surprise awaiting around every corner.”
—Brian Clegg, author of Inflight Science and The Universe Inside You

"Ultimately, this is a serious book with a light touch."
—Bloomberg News

"Animals are fascinating if reluctant soldiers in the biotech revolution, writes journalist Anthes (Instant Egghead Guide: The Mind) in this witty and thought-provoking book."
—Publisher's Weekly

"Medicine-producing goats, a glowing beagle, and remote-controlled rats seem like science fiction, but not only are they scientifically possible, they’re already here. Welcome to the weird world of animal biotechnology presented by journalist Anthes ... The book is a quick, often surprising review of current advances, giving accessible treatment to a weighty subject and employing clear descriptions of complex science. Anthes not only explores what is being done but also asks why and if it should be done. Along the way, the book reveals much about humans and our connections to animals and the world we all inhabit."
—Booklist 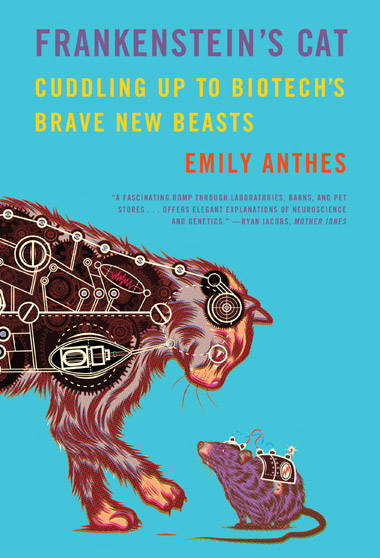